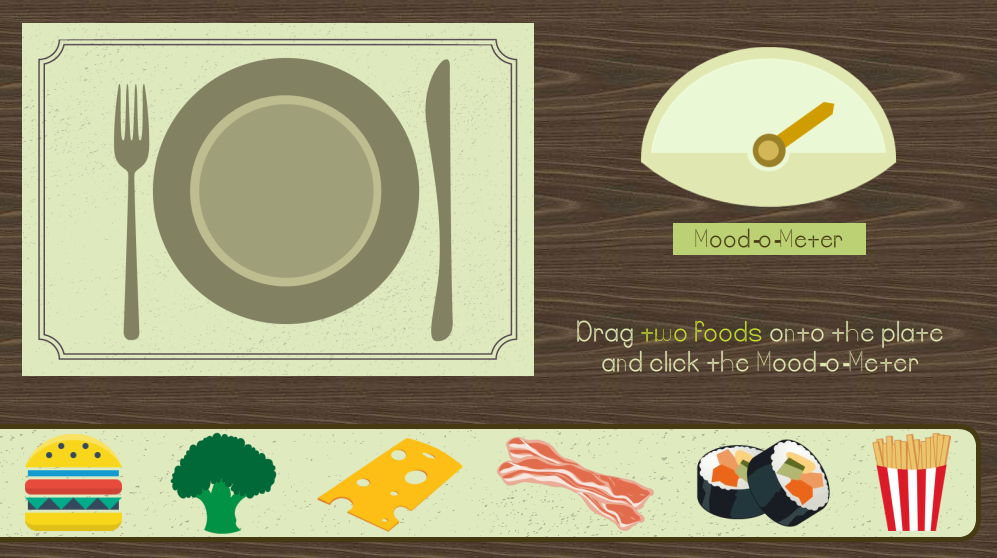 Now, I am cooler than all that. How cool, you ask? So cool that I used this e-learning heroes challenge to shoehorn emojis into an online interaction.

These days, there is an emoji for just about anything. The original idea, however, was to give a visual indication of emotions. The name comes from the latin ’emo-‘ and ‘-ohjee’. ’emo-‘ was what the Ancient Romans called teenagers who wore too much black and who felt their feelings more deeply than other people feel their feelings. ‘-ohjee’ was what parents often said after being told that their emo child had transformed into a cartoonish image . Probably. Or maybe not. Okay, I’ll admit it: I don’t know the etymology of the word emoji.

All of that aside, I decided it would be cool to create a virtual Mood-o-Meter. Because I’m currently believing that emojis are cool, my Mood-o-Meter would use different emojis to indicate the various moods it encounters.

But I didn’t want to just randomly guess at the mood of my users. That would be boring. I needed a way of predicting their mood…

Despite my repeated prayers, I presently lack the magics to actually peer out of a computer monitor and see the colour of the souls of e-learning users. So, I decided to make a super-simple game because games are much less boring. As a basis of the game, I needed something that could affect mood…

Food! Food is something that can affect a mood. It sure affects mine. What is more, food rhymes with mood, which must have been fate telling me something.

So, after fate told me to make a game about foods and moods so that I could justify using emojis on screen, I realised that was also going to make me design an interaction.

Using a drag-and-drop interaction, the learner is asked to select two food items they want. Then, drag the food items onto their plate and turn their attention to the ‘Mood-o-Meter’. As if through steampunk wizardry, the Mood-o-Meter whizzes and churns to analyse the learner’s selections. After it’s complete, the Mood-o-Meter outputs an emoji-based indication of how the user would feel after eating their meal. It can be tried repeatedly, as the Mood-o-Meter resets each time.

The Mood-o-Meter is a quickly composed example, so it’s not exactly an artistic masterpiece. I found some of the pictures in my image library. The emojis were part of an image set that I’ve had for a while. Others pictures, I borrowed from Pixabay. I created the Mood-o-Meter image myself.

The food items were largely selected as the first ones at hand.

The wooden background is meant to simulate a table. I also added a nice placemat and plate, ’cause we’re not animals.

Disclaimer: This is not nutritional advice. Nothing about it is to be taken seriously. Except, of course, for the uber-serious way that it shows how we can use rapid-development tools to create unique multimedia interactions.
I can’t actually guarantee that eating broccoli with sushi will make you feel super happy. Maybe your emoji will be frowny. Maybe the broccoli is over cooked. Or the sushi might be that too-chewy eel stuff. Then what? THEN WHAT? 🙁